Jan 20 Posted by Board Member in General News

Mahatma Gandhi. Florence Nightingale. William Shakespeare. Albert Einstein. Michelangelo. Jane Austen. Mother Teresa. These are all men and women who came into this world and left it better than they found it through art, philosophy, science, math, and a passion for others. Among these influencers is Dr. Martin Luther King Jr. 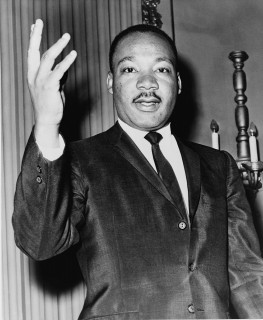 With both his birthplace and burial site being in Atlanta, Georgia, this man who changed the wake of history is joyfully claimed as a Georgia native. Dr. Martin Luther King, Jr. fought hard, yet peacefully for social justice in the United States. While his focus was certainly on civil rights, he also believed earnestly in the power of education and its ability to inspire.

Dr. King began attending public school at age 5 and later went to Booker T. Washington High School, where he skipped both the ninth and eleventh grades. In 1944, at a mere 15 years old, he began his education at Morehouse College. He earned a degree in sociology in 1948, and then went on to Crozer Theological Seminary in Pennsylvania. To complete his doctoral study, Dr. Martin Luther King, Jr. spent his last years within the education system at Boston University where he earned his Ph.D. in 1955 at only 25 years old.

At the age of 18, with wisdom far beyond his years, MLK Jr. wrote a paper titled "The Purpose of Education." This excerpt compares what his peers believe education to be and what it actually is.

"We must remember that intelligence is not enough. Intelligence plus character – that is the goal of true education. The complete education gives one not only power of concentration, but worthy objectives upon which to concentrate."

Dr. King is a true example of someone who took education by the reigns and set forth to use it for good. He didn't accept mediocrity as the standard but pushed to be more and learn more. While Dr. King is primarily a beacon for peaceful protest and his massive influence on the civil rights movement, he should also be seen as an inspiration for pursuing true education for both teachers and students alike.

So, set forth and use today to remember Dr. Martin Luther King, Jr. for his contribution to the United States as a civil rights activist, but also as an exceptional learner and teacher who used his knowledge to work towards something bigger than himself.

The Cherokee County Educational Foundation also has a passion for the educational system. We aim to provide the means for schools to provide teachers and students more resources and opportunities to expand their education. To donate, click here!