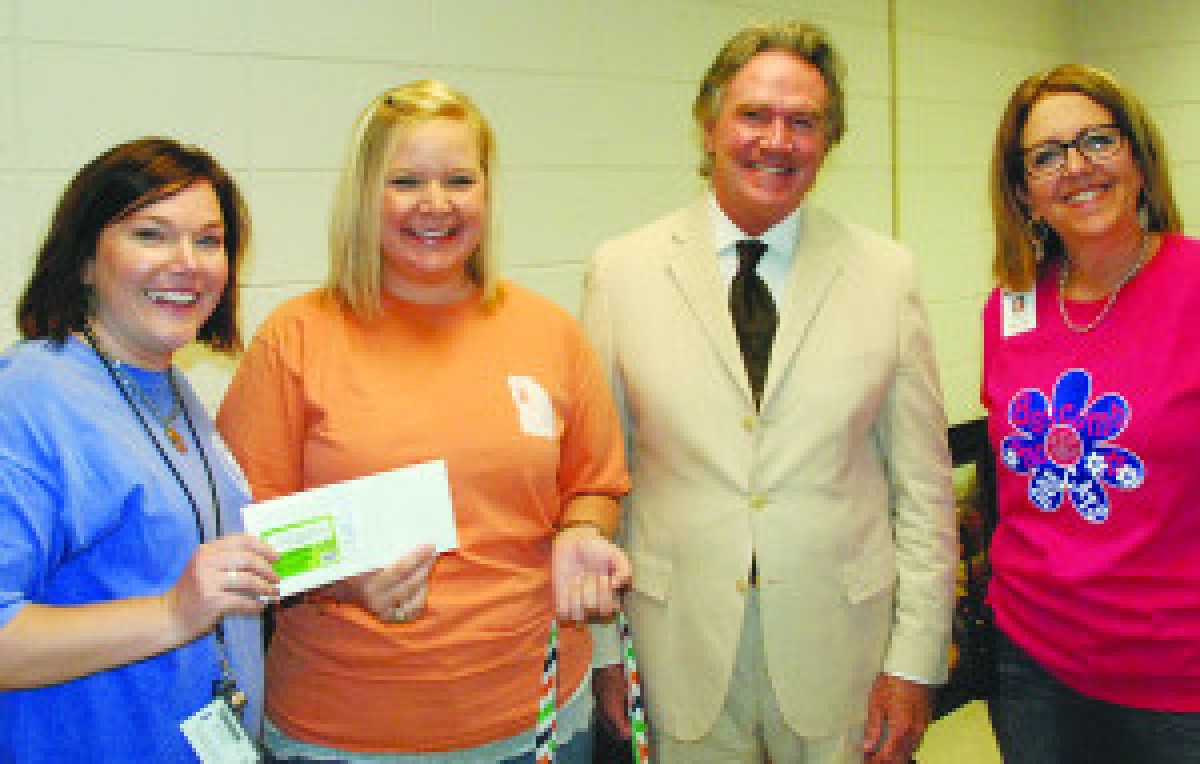 The winners of the Cherokee County Educational Foundation’s second annual “On the Road with CCEF” Contest for Cherokee County School District employees spread the message of supporting public education both near and far!

For the first time, the contest included two prizes… one for the CCSD employee who wore a CCEF 2015 T-shirt to the destination the farthest from Cherokee County during summer break, and one who was selected from a random drawing of all entries.

River Ridge High School teacher and coach Mike Britt on Friday, Aug. 7, 2015 was surprised with his prize for traveling the farthest… to China!  Bascomb Elementary School teacher Julie Peppers, who submitted a photo of herself in Hilton Head, S.C. won the random drawing.

Employees shared photos of their travels to foreign countries to learn, visit loved ones and more (one CCSD employee celebrated her honeymoon in Cancun in her CCEF T-shirt!), as well as images of educators traveling across the United States.

Board President William “Billy” G. Hasty Jr. said the second annual contest is a wonderful way to raise awareness for the foundation and thank educators for their support of CCEF.

The advertised prize for each winner was a $100 Visa gift card from CCEF, but Mr. Hasty continued his tradition of donating an additional $100 to the distance-traveled winner.

Mr. Britt entered a photo of himself, his wife and grandson on the Great Wall of China, which was one stop on their month-long visit to China.  His son-in-law was wrapping up a two-year tenure as an English teacher at Inner Mongolia University and teaching U.S. History (one of the subjects Mr. Britt teaches) at a high school there.  Mr. Britt’s daughter and grandson had been living in China during this time as well, but now all are back home in Georgia.

Mr. Britt said they enjoyed sight-seeing, with visits to Tiananmen Square, temples and other landmarks; and experiencing the culture, customs and cuisine.  One of his favorite memories was seeing his son-in-law teach a U.S. History class to the Chinese high school students.

The contest, which will be continued next summer, helps raise awareness about CCEF’s mission: to support students and staff of CCSD by promoting teaching and learning and celebrating achievements. The Foundation seeks funding and resources to enrich CCSD schools in areas not fully funded in the regular school program.

The Foundation, which was founded in the fall of 2012, has donated more than $56,000 to CCSD through grants to teachers, schools and programs and scholarships to students.

The next CCEF fundraiser is its annual golf tournament, which is on Sept. 29 at Woodmont Golf & Country Club.  Sponsors, silent auction items and foursomes are needed.  For information, please see the website at www.cherokeecountyeducationalfoundation.org

On the Road with CCEF’ distance-traveled contest winner River Ridge High School teacher and coach Mike Britt, right, who also is pictured on screen at the Great Wall of China with his family, is congratulated by, from left to right, CCEF Board Fundraising Chairman Kevin Williams of Chick-fil-A of Canton, Board Secretary Amanda Arnold of Credit Union of Georgia and Board President William “Billy” G. Hasty Jr.

On the Road with CCEF’ distance-traveled contest winner River Ridge High School teacher and coach Mike Britt is pictured at the Great Wall of China. Pictured with him is his wife, former CCSD School Nurse Lynn Britt, and their grandson, Joseph Warren.