If you've been in Cherokee County for any length of time, you've probably heard of Cherokee High School which sits on Marietta Highway. However, Cherokee High School hasn't always been here. In fact, it didn't become Cherokee High School until 1956. It was previously known as Canton High School – which is where Ms. Carolyn Turner graduated from in 1948. As you will see, Ms. Turner has been a light to the community and is truly a deserving recipient of the 2021 Alumni of the Year Award.

Once Ms. Turner graduated in 1948, she went just up the road to attend Reinhardt College, where she graduated in 1950. Her career wouldn't take her too far from home as she started teaching first grade at Ball Ground Elementary. She would go on to teach and inspire students at Ball Ground ES for 15 years! After her time at Ball Ground concluded, she began teaching at Hickory Flat Elementary, where she stayed for 26 years. Imagine just how many students can have their lives touched over the course of 41 years.

After retiring, Ms. Turner lost her husband and then decided to get back into the classroom where she served as a long-term sub and substitute teacher. By the time she concluded this role, she had been in the classroom for 60 years – wow! 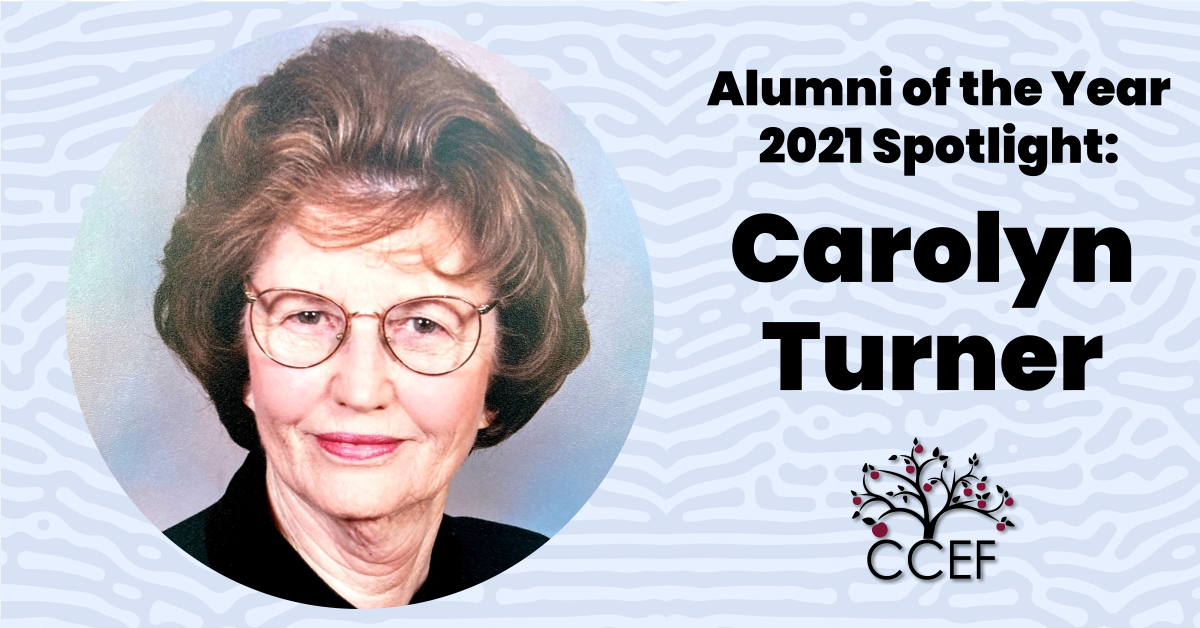 Ms. Turner was described as a teacher who saw all of her students for all they could be. Patsy Jordan, former student and current friend to Ms. Turner recalls, "I remember so well on one of the coldest mornings of the year, how she comforted some children who had walked to school. They came in shivering and their hands were near frostbit. She took them, wrapped their hands in towels, and placed them near the old radiator heaters in our classroom. Instead of worrying about the academics of the day, Ms. Turner allowed the rest of the class to do silent reading at our seats while she cared for the children with the frozen hands." It's obvious from this story that Carolyn Turner inspired her students not just by her teaching, but by showing compassion to others.

Patsy Jordan was one of those inspired children as Ms. Turner is the reason for Ms. Jordan becoming a teacher herself. Jordan recalls being so awe-struck by Ms. Turner that she would dress just like Turner at home when she was young and in turn give mini lessons to all of her dolls. Though Patsy Jordan and Carolyn Turner's relationship started as student/teacher, over the years they have become close friends.

It's safe to say that teachers never truly know the impact they have on their students. For Ms. Turner, she was just doing what she was called to do, but for her students, it was so much more. She educated young minds, cared for those who needed it most, and inspired others along the way to show empathy. Ms. Carolyn Turner had a special heart for teaching, learning, and loving children which is evident in her 60 years of service to our school district.